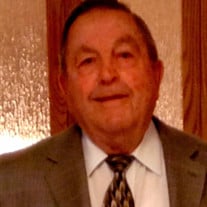 Princeton - Roland "Dean" D. Yelm, 94, of Princeton, IL., passed away in the morning hours of Thursday, September 16, 2021 at OSF Saint Clare Medical Center (a.k.a. Perry) in Princeton, IL. Surrounded by his loving family. Dean was born on September 12, 1927 in West Jersey, IL., to the late Everett B and Vida I (Munts) Yelm. He was a graduate of Kewanee High School, Class of 1948, excelling in track and cross country. After graduating high school, Dean was employed by the CB&Q/Burlington Northern Railroad Company. He joined the military and served in the United States Army as a Staff Sargent from November 6, 1950 to November 5, 1952. After honorable discharge from the military, he returned back to work for the CB&Q/Burlington Northern Railroad until he retired in 1980. Dean married his love, Sarah Genevieve "Genny" Carlson on November 16, 1957 at the Knox County Court House in Knoxville, IL. Together they raised two sons, Charlie and Curt. Relocating the family to Princeton in 1958, where he lived with his wife and children. He was long standing members with the Princeton Moose Lodge Post 1339, Williamsfield American Legion Post 371 and the Seatonville Community Church. He enjoyed gardening, vegetables and flowers. He was very proud to share his bounty with his family and friends. He enjoyed woodworking, something he became very good at, traveling and vacationing with Genny and the boys. Dean enjoyed golf, especially beating his two sons. He was a board member for many years at the Seatonville Community Church holding the position of Vice Chairman and he was also the Head Usher. Mostly he loved spending time with his family, his church family and friends. Surviving are his two sons, Charlie (Collette) Yelm of Princeton, IL and Curt (Charlotte) Yelm of Pingree Grove, IL; two grandchildren, Kathryn (Mike) Sayler and Michael (Whitney) Yelm; five great grandchildren, Hayden, Harper, Hudson, Kennedy and Finley (and one furry great grand pup, Caydi); two brothers, Everett "Cowboy"(Lorna) Yelm and Earl "Dick" (Marlis) Yelm. Preceding him in death are his parents, Everett and Vida Yelm, his wife of 36 years, Sarah Genevieve "Genny" Yelm (March 16, 1995), one grandson, Cody D. Yelm, three sisters, Betty Gibbs, Ada Faye Olin, and Maime West, one brother Merlin "Red" Yelm. The family will receive friends on Monday, September 20, 2021, from 5:00 pm to 7:00 pm at Norberg Memorial Home, Inc. & Monuments in Princeton, IL. Services will be held on Tuesday, September 21, 2021 at the Seatonville Community Church, 110 US-6, Seatonville, IL., at 10:00 a.m., officiated by Reverend Bill Jacobsen. Prior to services Tuesday, there will be a one hour visitation from 9:00 a.m. to 10:00 a.m. at the Seatonville Community Church. Graveside services to follow at Oakland Cemetery in Princeton, IL. Military Rites Accorded. In lieu of flowers, memorials may be directed to Seatonville Community Church. Online memorials and condolences may be directed to www.norbergfh.com Arrangements by Norberg Memorial Home, Inc. & Monuments.

The family of Roland D Yelm created this Life Tributes page to make it easy to share your memories.

Send flowers to the Yelm family.