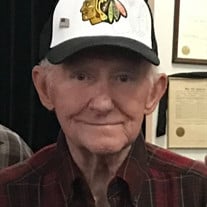 Princeton – Ronald F. Pioterek, 86, of Princeton, IL passed away at Liberty Village on Sunday, April 28, 2019 surrounded by loved ones. Ronald loving know as Ron by family and friends was born on February 18, 1933 in Chicago, IL to the late Frank and Monica “Minnie” (Pajrowska) Pioterek. He was a graduate of Princeton High School and soon after enlisted in the US Army serving our country in the Korean War. He later married Ruth McCloud on November 18, 1967 at Saint Louis Catholic Church in Princeton, IL. He worked as a child as a golf caddy, where he was part of the Caddy Union at the age of twelve. He also delivered papers for Chicago Downtown News before his family moved to Princeton. He worked at LCN as a machinist for forty-four years before retirement in 1995. Ron was a past Commander of the Princeton American Legion. He was also a member of the Princeton Bowling Association and the very first three time winner of the Bowling Masters. He was also inducted into the Princeton Bowling Association Hall of Fame. He also achieved an Athletic Letter from Webster High School in Chicago, IL, for his piano playing. He was quite the piano player in his younger years and enjoyed music in general. Having an extensive album collection along with two record players. He loved his flower garden and grew some of the most beautiful orchids. He was even featured in the Illinois Valley Life Styles for beautiful orchids. He enjoyed stamp collecting, coin collecting and he enjoyed coffee at the Coffee Cup with friends. His all-time favorite holiday was Christmas. He and Ruth would spend weeks decorating for Christmas. His nieces often joked with him that one of his hobbies was watching Aunt Ruth order Hallmark ornaments. Family was the most important thing to Ron. He was a good man who loved his family, friends, country and God. He will be greatly missed by all that knew him. Ron is survived by his loving wife Ruth of 51 years, his brother’s children, Brenda and Matthew Pioterek and many nieces and nephews. He is preceded in death by his parents, his mother and father-in-law, Hubert and Isabel McCloud; one sister in infancy; one brother, Kenneth Pioterek and one sister-in-law, Patricia Pioterek. Visitation will be held at Saint Louis Catholic Church, Princeton, IL on Wednesday, May 1, 2019 from 9:00 a.m. to 11:00 a.m. A Funeral Mass for Ronald will be held on Wednesday, May 1, 2019 at 11:00 a.m. at Saint Louis Catholic Church, Princeton, IL, officiated by Father Daniel Gifford and Deacon John Murphy. Following the service there will be a graveside service at Oakland Cemetery in Princeton, IL. In lieu of flowers, memorials may be directed to Princeton Flags of Freedom. Arrangements by Norberg Memorial Home, Princeton, IL. Online condolences may be left at www.norbergfh.com

Princeton &#8211; Ronald F. Pioterek, 86, of Princeton, IL passed away at Liberty Village on Sunday, April 28, 2019 surrounded by loved ones. Ronald loving know as Ron by family and friends was born on February 18, 1933 in Chicago, IL to... View Obituary & Service Information

The family of Ronald F Pioterek created this Life Tributes page to make it easy to share your memories.

Send flowers to the Pioterek family.