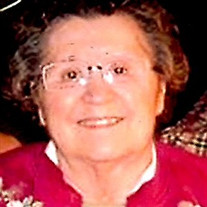 Princeton – Ruth E. Rapp, 95, of Princeton passed away on August 10, 2018 at Aperion Care of Princeton, IL. Services will be held at 12 p.m. on Tuesday, August 21, 2018 at the Evangelical Covenant Church, Princeton, IL. Visitation will be from 11 a.m. to 12 p.m. prior to the service. Pastor Derek Boggs and Reverend John Weborg will officiate. Burial to follow at Oakland Cemetery in Princeton, IL. Ruth was born in Berlin Township, Bureau County, Illinois. The daughter of John and Lillian (Kumpf) Eggers. She was a graduate of Princeton High School, class of 1941 and married Robert C. Rapp on September 13, 1941. Ruth became a lifetime rural resident of Princeton where she helped her husband farm till their two sons were able to help with the livestock and field work. She was then employed at Harper-Wyman in Princeton, followed by Perry Memorial Hospital in bookkeeping and insurance claims for several years. She had been confirmed at St. Matthews Lutheran Church in Princeton, IL and then became a life-time member of the Evangelical Covenant Church of Princeton, IL after her marriage to Robert. Ruth was a long-time member of her neighborhood lady’s Presbyterian Hill Club. She was also active with her sons in the South Princeton 4-H Club and Cub Scouts. Ruth especially enjoyed fishing in Wisconsin and Florida with her husband, children and grandchildren, along with becoming an avid horse racing fan at the Quad City Downs and horse and dog racing tracks in Florida. She was a loving wife, mother, grandmother and great grandmother, a great homemaker and terrific cook. Ruth was preceded in death by her parents, her husband, Robert, her three brothers, George Eggers, Ivan Eggers and Roger Eggers, her half-brother Bruce Eggers and her oldest son Donald Rapp, who had retired from farming in early 2000 and resettled with his wife Sandra in Kissimmee, Florida near where Robert and Ruth had previously purchased their winter vacation home. She is survived by her other son Robert (Terry) Rapp, of Princeton, IL, her daughter-in-law Sandra Rapp, of Kissimmee, FL, Five grandchildren; Brenda (Greg) Echevarria and Christy (Scott) Cornman of Florida, Vince Rapp of Princeton, Doug (Jessica) Rapp of North Carolina and Andrew (Tara Maloy) Rapp of Princeton, IL, her half-sister Betty Anne Eggers of North Carolina, ten great grandchildren, Noah, Sam and Lily Cornman of Florida, Kortnie, Jackie, Adam and Eli Rapp of Morrison, IL, Mason and Riley Rapp of North Carolina and Brixen Rapp of Princeton, along with numerous nieces and nephews. Pallbearers will be Mike Eggers, George Eggers, Vince, Doug and Andy Rapp, and Scott Cornman. Honorary pallbearers will be Dick Eggers, Jerry Rogan, Jim Rapp and Charlie Evans. In lieu of flowers memorials may be directed to the Evangelical Covenant Church of Princeton, IL, St. Matthews Lutheran Church of Princeton, IL or Aperion Care of Princeton, IL Online condolences may be left at www.norbergfh.com Arrangements by Norberg Memorial Home, Inc. & Monuments

The family of Ruth E Rapp created this Life Tributes page to make it easy to share your memories.

Princeton – Ruth E. Rapp, 95, of Princeton passed away on August...

Send flowers to the Rapp family.