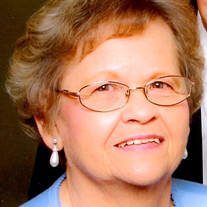 Princeton – Sally Lu (Blackwell) King, 85, of Princeton, IL passed away at Aperion Care of Princeton, IL on Thursday, August 8, 2019. Sally was born on June 23, 1934 in Oakwood, IL to the late John and Jessie (Becker) Blackwell. She was a graduate of LaMoille Community High School, Class of 1952. She married her love, the late Walter R King on August 3, 1952. Her services were officiated by her grandfather, Reverend Wesley Blackwell at the First Congregational Church of LaMoille. Spending her entire married life on the family farm south of Van Orin, IL. They soon after started their family. Working on the farm most of her life, she also worked at the former Pamida store in Princeton and in later years, Hoffman’s Patterns of the Past. She was a devoted wife, mother and grandmother and loved her time with her family. Her love for God was shown in all that she was involved with. Throughout her life she shared her gifts through Bible studies, Kids Klub, Home Extension, Craft Club, Good Sam’s Camping Club, TOPS, Sunday School, VBS, The Special Olympics, TEC and Christian Women’s Club, just to name a few. Sally was a long-standing member of the First Congregational Church of LaMoille. A very special person always concerned for others. She loved having gatherings at her home where all were welcome. Known for her “goulash” and “sugar cookies”. A genuine caring person who believed in the power of prayer and devoted to her Lord and Savior Jesus Christ. Her gentle spirit, quick wit and ability to have fun will be remembered by all. She is survived by one son, Gerald R (Jeannie) King of Princeton; one daughter Barbara A (Allen) Klein of LaMoille; seven grandchildren, Thomas (Tina) Klein of LaMoillle, Matthew Klein of Princeton, Jeralyn (Tim) Glass of Princeton, Jason (Melanie) Klein of LaMoille, Adam Klein of Princeton, Katrina (Mitch) McCoy of Princeton and Joanna Klein of LaMoille; twelve great grandchildren; one sister Joyce Bickett of Princeton; one brother Dennis H (Lois) Blackwell of Zephyrhills, FL; and many nieces, nephews and cousins. Sally is preceded in death by her parents, loving husband of 61 years, Walter R. King (01/2014), one daughter, Kay Yvonne, one brother, Wesley L. Blackwell and two nephews, Dennis E. C. King and Wayne King. In lieu of flowers, memorials may be directed to the family for charitable distribution. A visitation for Sally will be held on Monday, August 12, 2019 at Norberg Memorial Home, Inc. & Monuments from 4:00 p.m. to 7:00 p.m. Services will be held on Tuesday, August 13, 2019 at the First Congregational Church in LaMoille, IL at 10:00 a.m., officiated by Reverend Karl Johnson, followed by a graveside services at Elm Lawn Cemetery, Princeton, IL. Online condolences may be left at www.norbergfh.com Arrangements by Norberg Memorial Home, Inc. & Monuments.

The family of Sally Lu King created this Life Tributes page to make it easy to share your memories.

Send flowers to the King family.