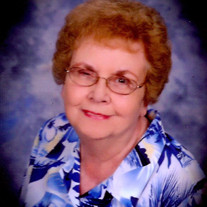 Princeton – Shelby J. Welsh 81 of Princeton passed away on Wednesday, February 19, 2020 at Heartland Health Care in Henry, IL surrounded by her family. Shelby was born on November 14, 1938 to the late Earl and Wilma (Wilson) White in Clever, MO. She was a graduate of Hall High School, Class of 1956. She married the late Paul E. Welsh at St. Louis Catholic Church in Princeton on May 5, 1962. She was a homemaker and wonderful mother to her three children. She was a member of St. Louis Catholic Church. She was a diehard Cardinals Fan and enjoyed working with ceramics. You could catch her visiting with family and friends, she was a social butterfly and always made time to say hello to everyone. She enjoyed traveling, especially to Arizona and Texas during the cold Illinois winters. You could find her curled up with a good book or watching an old western any day of the week. Her favorite times were spent with her family and friends, over a good meal talking about stories of days gone by. She will be greatly missed by all who knew and loved her. Shelby is survived by her three children, Paula Waugamon from Wyanet, IL, Randy Welsh from Princeton, IL and Mike (Laurie Thomas) Welsh of Ohio, IL; two special boys, Colton and Conner Smith; one brothers, Earl (Diana) White; two brother-in-law’s, John (Judy) Welsh and Larry Flaherty; as well as several nieces, nephews and cousins. She is preceded in death by her parents, Earl and Wilma White, her husband Paul E. Welsh (01/01/2015), one sister, Mary Flaherty, one son-in-law, Dale Waugamon, one niece Deb Bubon and one nephew, Bob Welsh. In life of flowers, memorials may be directed to St. Louis Catholic Church in Princeton, IL or Friends of Strays in Princeton, IL. A Mass will be held at a later date and time, the family will provide an announcement in the Bureau County Republican at that time. Followed by a private burial. Arrangements by Norberg Memorial Home, Inc. & Monuments Online condolences may be left at www.norbergfh.com

Princeton &#8211; Shelby J. Welsh 81 of Princeton passed away on Wednesday, February 19, 2020 at Heartland Health Care in Henry, IL surrounded by her family. Shelby was born on November 14, 1938 to the late Earl and Wilma (Wilson) White... View Obituary & Service Information

The family of Shelby J Welsh created this Life Tributes page to make it easy to share your memories.

Princeton – Shelby J. Welsh 81 of Princeton passed away on Wednesday,...

Send flowers to the Welsh family.