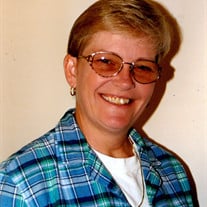 Princeton – Sheryl J. Marsett, 63, of Princeton, IL., passed away on Thursday, July 4, 2019 at home after a long battle with cancer, surrounded by her loved ones. Sheryl was born in Princeton, IL on November 29, 1955 to the late Llyle Johnson and Joyce (Christiansen) Killen. She was a graduate of LaMoille High School in 1973 and attended IVCC. She worked at the Harper Wyman Company, 27 ½ years until it closed. She later worked at Delmonte and the Bureau County Courthouse and jail. She enjoyed bowling and was a member of the Ladd Lanes Bowling team in Princeton, IL. She enjoyed playing softball in her youth and was an avid Chicago Bears Fan. Her family doesn’t know if the word avid is big enough to describe how huge of a Bear’s fan she really was. She loved all animals and was a devoted dog care giver for family and friends. She was courageous, positive and an honest hard working woman. She lived her life just the way she wanted and did it her way. She will be very missed by her family, friends and any animals she came in contact with. Sheryl is survived by her daughter, Jamie (Aaron) Phillips of Washington, IL; two grandchildren, Madeline Phillips and Mason Phillips; one sister, Vicki (Dan) Smith; four stepsisters, Charlene Thompson, Debbie (Ross) Taylor, Terry Guzman and Cindy (Clois) Henderson; three stepbrothers, Steve Killen, Glen (Val) Killen and Michael (Kristy) Killen; and her stepfather, Glen Killen. Sheryl is also survived by her dear friend, Anna Flaig of many years. She is preceded in death by her mother, Joyce (Christiansen) Killen and her father Llyle Johnson. A visitation will be held at Norberg Memorial Home, Inc. on Sunday, July 7, 2019 from 4:00 p.m. to 6:00 p.m. The family encourages everyone to wear their Chicago Bears attire if they would like, because that’s the way Sheryl would have wanted it. Services for Sheryl will be held at the New Hope Church of the Nazarene in Princeton, IL at 10:00 a.m. on Monday, July 8, 2019, officiated by Pastor Laura Root-Tanner, followed by a graveside services at Oakland Cemetery, Princeton, IL. In lieu of flowers, memorials may be directed to the Friends of Strays, Princeton, IL. Arrangements by Norberg Memorial Home, Inc. Princeton, IL. Online condolences may be left at www.norbergfh.com

Princeton &#8211; Sheryl J. Marsett, 63, of Princeton, IL., passed away on Thursday, July 4, 2019 at home after a long battle with cancer, surrounded by her loved ones. Sheryl was born in Princeton, IL on November 29, 1955 to the late Llyle... View Obituary & Service Information

The family of Sheryl J Marsett created this Life Tributes page to make it easy to share your memories.

Send flowers to the Marsett family.