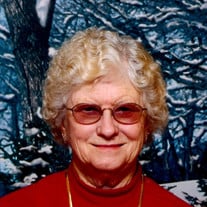 Princeton - Shirley Marie (Hubbard) Haun, 85 years of age, passed away on Monday, December 13, 2021 peacefully at her daughter-in-laws home, surrounded by her family. Shirley was born on January 15, 1936 on her family's farm in Berlin Township, IL to the late Albert and Irene (Watson) Hubbard. She graduated from Bureau Township, Class of 1953. After graduation she married her love, Harry Haun, Jr. on March 13, 1954 in Princeton, IL. She and Harry moved to Princeton on February 20, 1959, the reason we know this is because she kept great notes. She and Harry worked their farm their entire life. She could do just about anything, she was a farmer's wife and proud of it. Milking cows, slopping hogs, to sewing socks or mending fences she really could do it all. She loved driving the tractor or tending to her garden. They had four children, Terry, Albert, Kenneth and Sandra, all children were raised on the farm and had a great love for the outdoors. Her husband and all four children preceded her in death. She was absolutely one of the strongest women and a wonderful example for all who knew her. Shirley enjoyed playing the organ and Christmas was a special time for everyone, singing songs around the organ with the family, sweet smells of her sugar cookies in the air, the house could be so noisy and she loved every moment of it. She liked jigsaw puzzles and you could find her at her kitchen table, doing a jigsaw puzzle listening to country music. She loved her trips to Nashville, TN and going to the Grand Ole Opera, they went several times and she didn't forget a detail and would share her times with her grandchildren. She is survived by her daughter-in-law (whom she referred to as her daughter) and caretaker, Lisa Haun of Princeton, IL; One brother, Larry Hubbard of Princeton, IL; six grandchildren, Amy Malo, Cynthia Haun, Debra Haun Jaggers, April Barringer Melton, Bob Haun, Albert Haun Jr., several great grandchildren and one great great-grandchild. Preceding her in death were her parents, Albert and Irene Hubbard, her husband of 37 years, Harry Haun Jr (3.29.1991), her four children, Sandra Haun (9.28.1994), Terry Haun (7.26.1999), Kenneth Haun (12.23.2016) and Albert Haun (2.6.21), three siblings, Harold Hubbard, Richard Hubbard and Wayne Hubbard. In lieu of flowers, memorials may be directed to the family. A visitation for Shirley will be held on Saturday, December 18, 2021 from 10:00 a.m. to 12:00 p.m. at Norberg Memorial Home, Inc. & Monuments. Services to follow at 12:00 p.m. at Norberg Memorial Home, Inc. & Monuments officiated by Pastor Dave Danlar, Saturday, November 18, 2021. Graveside services to follow at Oakland Cemetery in Princeton, IL. Online memorials and condolence may be directed to www.norbergfh.com Arrangements by Norberg Memorial Home, Inc. & Monuments.

Princeton - Shirley Marie (Hubbard) Haun, 85 years of age, passed away on Monday, December 13, 2021 peacefully at her daughter-in-laws home, surrounded by her family. Shirley was born on January 15, 1936 on her family's farm in Berlin Township,... View Obituary & Service Information

The family of Shirley Marie Haun created this Life Tributes page to make it easy to share your memories.

Send flowers to the Haun family.