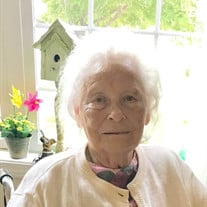 Princeton – Shirley Ann Lilley, 87, passed away at Manor Court on Thursday, June 20, 2019. Shirley was born in Princeton, IL., on June 18, 1932 to the late Joseph and Glenna (Dickinson) Rieker. She attended Malden High School. She married the late John Lilley in Dover, IL on December 19, 1950 and they started their family. Shirley spent her time as a homemaker and helped her husband in the trucking business. She really enjoyed yard work and gardening, something she did her whole life, until she was unable to. She liked to go to thrift stores and garage sales hunting for hidden treasures. She was an animal lover and had too many to name. She enjoyed reading and traveling. One of her favorite things to do was go on mission trips with her church family. She traveled to China, Puerto Rico, New Orleans, Israel and the Philippines, just to name a few. She would usually spend three weeks at a time and enjoyed spreading Gods word all over the world. What she loved the most in this life was spending time with her family and friends, especially her grandchildren, whom she adored. Shirley is survived by four children, three daughters and one son, Marsha Lilley of Princeton, IL., Sandy (Francis) Grysko of Rotonda, FL., Jill (Jerry) Head of Harrison, AR., and Jim (Marlene Khiyami) Lilley of Venice, FL; seven grandchildren, Scott Lilley, Janelle (Joe) McCarter, Jodi (Scot) Nally, Jon (Kirby) Lilley, Joel (Carla) Parks, Rachel (Brandon) Goettl and Timothy (Rachel) Grysko; nine great grandchildren, Logan, Keeley, Kannon, Alexander, Autumn, Noel, Violet, Pearl and Levi; one sister, Joyce Wathen of Overland Park, KS; one brother Gary (Sandy) Rieker of Princeton, IL. She is preceded in death by her parents, Joseph and Glenna Rieker; her husband, John Lilley (01-01-1984); two sisters, Joanne Schertz and Maxine Lazar; one brother, Joseph Rieker; two grandchildren, Nevaeh Nally and John Francis Grysko; one son-in-law, Jeff Parks; one sister-in-law, Judy Rieker; three brother’s-in-law, Jim Schertz, Alex Lazar and Verle Wathen. A visitation will be held on Monday, June 24, 2019, at Norberg Memorial Home, Inc. in Princeton, IL., from 10:00 a.m. to 12:00 p.m. Services for Shirley will be held at Norberg Memorial Home Inc. on Monday, June 24, 2019 at 12:00 p.m. officiated by Pastor John Paul Robbins. Following by a graveside service at Prairie Repose Cemetery in Dover, IL. In lieu of flowers, memorials may be directed to the family for charitable distribution. Arrangements by Norberg Memorial Home, Inc. Online condolences may be left at www.norbergfh.com

The family of Shirley A. Lilley created this Life Tributes page to make it easy to share your memories.

Send flowers to the Lilley family.