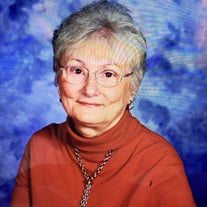 Princeton - Shirley Ann Olin, 84 of Princeton, Il passed away at her home, surrounded by her loving family on Sunday, July 4, 2021. Shirley was born in West Brooklyn, IL on May 4, 1937 to the late John and Lucille (Wilson) Thomson. She married the late Gerald "Jerry" Olin on august 14, 1954. In Hannibal Missouri before Jerry went into the service. She found work at a sewing factory in Buda, IL, the same factory that sewed the swimsuits for the USA Olympic swim team. Her daughters spent the summer feeling like they were swimming for USA, as she had sewn them each a suit. She later worked for Jostens from 1977 until she retired. Shirley was a member of St. Matthews Lutheran Church and the St. Matthews Quilters Club. They would make and ship their handmade quilts all over the world. She was also a very active member of the St. Mathews Bible Study Club. She was known for her ability to sew and make anything, especially the unfinished projects that were left behind for a few of her granddaughters, an inside joke the family liked to tease her about. She loved to travel, one of her favorite trips was to Colorado and the Mountains. She enjoyed reading, and loved to bake. If she was ever near a Ted Drewes Frozen Custard stand, be prepared to wait in line because it was one of her favorite treats. She liked keeping up with local events by reading the Bureau County Republican. She Enjoyed playing cards and games with friends and family. Nothing compared for the love she had for her family especially her grands and great grands, who she would babysit on Saturdays until she was no longer able to. Shirley is survived by her two daughters, Vickie (Richard) Townsend of Sheffield, IL and Linda (Fred Hofmann) Pierce of Dixon, IL.; five grandchildren Nicole (Richard) Pelszynski, Allison (Joe) Fox, Renee' Pierce, Dalton Townsend and Alexander Pierce; four great grandchildren; Isla, Matthew, Reese and Freya; one brother, John Thomson and a sister-in-law, who turned into her best friend over the years Carol Pendgraft; as well as several nieces, nephews and cousins. She is preceded in death by her husband, Jerry Olin (2004), her parents, John and Lucille Thomson and a sister-in-law, Sandy Thomson and one nephew James Thomson. In lieu of flowers, memorials may be directed to St. Matthews Church Quilting Guild. A visitation for Shirley will be held at Norberg Memorial Home, Inc. & Monuments on Friday, July 9, 2021 from 10:00 a.m. to 12:00 p.m. Services will be held on Friday, July 9, 2021 at Norbergs at 12:00 p.m. officiated by Pastor Scott Schmidt. Followed by graveside services at Elm Lawn Memorial Park. Online condolences and memorials may be left at www.norbergfh.com Arrangements by Norberg Memorial Home, Inc & Monuments.

Princeton - Shirley Ann Olin, 84 of Princeton, Il passed away at her home, surrounded by her loving family on Sunday, July 4, 2021. Shirley was born in West Brooklyn, IL on May 4, 1937 to the late John and Lucille (Wilson) Thomson. She married... View Obituary & Service Information

The family of Shirley Ann Olin created this Life Tributes page to make it easy to share your memories.

Send flowers to the Olin family.