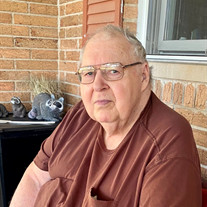 Princeton - Stanley Leroy Pierce, 78, passed away at his home on Friday, May 28, 2021 surrounded by his loved ones. Stanley, who went by Stan, was born on February 12, 1943 in Sioux Falls, SD, to the late Melvin and Mable (Johnson) Pierce. The family moved to Illinois when Stan was a teenager and he graduated from Champaign High School in Champaign, IL Class of 1960. He married and had three sons, Steven, Brian, and Eric, before he and his first wife divorced. He later married, Deanna Williams Eckberg, whom he met at work. He and Deanna married on February 3, 1985 in Carson City, NV. He worked as a grain merchandiser most of his life, the job that actually brought him to Princeton. He worked for the Chicago Board of Trade Clearing Corporation in Chicago, IL, Bureau Service Co in Princeton, IL, and then Consolidated Grain and Barge in Hennepin, IL from which he retired in 2004. Stanley loved to travel. One of his favorite trips was the 8000 mile trip in the Impala exploring the West and ending in California for a month with Deanna. The boys fondly remember many weekend trips with Dad where they would drive and check out the little towns as they passed through, and taking the train to a Cubs game, or visit museums. He was a Chicago Bears, Cubs, and Bulls fan. He also loved trains, collecting them, reading about them and traveling on them. He is survived by his wife of 36 plus years, Deanna Pierce; two sons, Steven (Sandra Martinez) Pierce of Chicago, IL and Eric Pierce of Eagle, CO; two grandchildren, Renee Pierce and Alexander Pierce; one great grandchild, Matthew; one sister Laurel (Fred) Hampel; four stepchildren, Rick (Leanne) Eckberg, Tim Eckberg, Randy Eckberg and Laura (CD) Schmied; nine step grandchildren, Dustin (Lauren) Eckberg, Annalise (Evan) Anderson, Lauren (Brandon Teske) Eckberg, Derrick (Kaelynn Geheber) Eckberg, Evan Eckberg, Olivia Eckberg, Hunter (Savanah Jensen) Lewis, Montana Von Holten, and Ashlyn Schmied; six step great grandchildren, Sadie, Aaron, Dallas, Finn, Easton, and Braxton. Stanley is preceded in death by his parents, Melvin and Mable Pierce and one son, Brian Pierce. In lieu of flowers, memorials may be directed to the family. A visitation for Stan will be held on Friday, June 4, 2021 at Norberg Memorial Home, Inc. & Monuments from 10:00 a.m. to 11:30 a.m. Services for Stan will follow the visitation at 11:30 a.m. at Norberg Memorial Home, Inc. & Monuments, officiated by Pastor Ryan Sutton. Graveside services to follow at Elm Lawn Memorial Park. Online condolences may be left at www.norbergfh.com Arrangements by Norberg Memorial Home, Inc. & Monuments.

Princeton - Stanley Leroy Pierce, 78, passed away at his home on Friday, May 28, 2021 surrounded by his loved ones. Stanley, who went by Stan, was born on February 12, 1943 in Sioux Falls, SD, to the late Melvin and Mable (Johnson) Pierce.... View Obituary & Service Information

The family of Stanley Pierce created this Life Tributes page to make it easy to share your memories.

Princeton - Stanley Leroy Pierce, 78, passed away at his home...

Send flowers to the Pierce family.