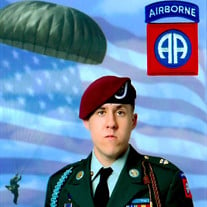 Princeton – Stefan James Nelson, 30, of Princeton, IL passed away due to complications after a motorcycle accident on Lovers Lane on Tuesday, April 7, 2020. His loved ones surrounded him with prayer and love. Stefan was born in Princeton, IL on September 26, 1989 to James and Andrea (Oloffson) Nelson. He was a graduate of Princeton High School, Class of 2008. After his high school graduation, Stefan enlisted in the U.S. army, where he served as an airborne infantryman with the 82nd Airborne division. He deployed to Iraq in 2011 and received an honorable discharge in 2016. Stefan went on to attend Bradley University, where he graduated Magna Cum Laude with a Bachelor of Science in Mechanical Engineering in 2019. After graduation he started working for CAT in Mossville, IL. Stefan had a huge, vibrant, silly and loud personality. He made friends easily and could quickly fill any room with laughter, dad jokes being his specialty. Without a hint of embarrassment, he would sing at the top of his lungs, intentionally changing the words in a song or improvising his own hilarious jingles. He lovingly gave his family and friends goofy nicknames that somehow always managed to stick. When he wasn’t making you laugh, Stefan could usually be found pouring his heart into the activities he loved. He loved working with his hands, doing construction alongside his father in his spare time, or repairing anything mechanical. He was a hunting enthusiast. He loved tromping through the woods with his brother-in-law and spending hours at the gun range with his uncle and cousins. Most of all, he loved being a dad to his 2 daughters, Charlie and Rosie. Together they built a Barbie dream house, shot BB guns, played dolls, and had 3 person dance parties. He was the most devoted father, and his silly bedtime stories will be missed the most. Stefan is survived by his former spouse and mother of his daughters, Katherine Nelson of Princeton, IL; two daughters, Charlotte and Rosalie Nelson both of Princeton, IL; his parents, James and Andrea Nelson of Princeton, IL; his twin sister, Kailey Nelson of Peru, IL; one brother-in-law, Eric Swenson of Seymour, IL; five grandparents, Gary and Mary Oloffson, Arthur and DeeAnn Nelson and Virginia Dorff; his mother-in-law, Debra Swenson and grandmother-in-law, Sheila Swenson. He is preceded in death by his grand father-in-law Conrad Swenson, grand mother-in-law Maxine Cole and his father-in-law, Willliam Swenson. In lieu of flowers, memorials may be directed to the family for charitable distribution. You may also donate online at www.norbergfh.com Due to the current pandemic, Norberg Memorial Home, Inc. & Monuments will be hosting a drive-thru visitation on April 17, 2020, from 9:00 a.m. to 12:00 p.m. at their location 701 E. Thompson Street, Princeton, IL. Services for Stefan will be private for immediate family members only, per the family’s wishes, it will also be livestreamed in a private group on Facebook. Please see the following link to join the group prior to services https://www.facebook.com/groups/Norbergmemorialhomememorialservicegroup/ on April 17, 2020 1:00 p.m. officiated by Pastor Derek C. Boggs. Graveside services to follow at Elm Lawn Cemetery in Princeton, IL, military rites accorded. Arrangements by Norberg Memorial Home, Inc. & Monuments Online condolences at www.norbergfh.com

Princeton &#8211; Stefan James Nelson, 30, of Princeton, IL passed away due to complications after a motorcycle accident on Lovers Lane on Tuesday, April 7, 2020. His loved ones surrounded him with prayer and love. Stefan was born in Princeton,... View Obituary & Service Information

The family of Stefan James Nelson created this Life Tributes page to make it easy to share your memories.