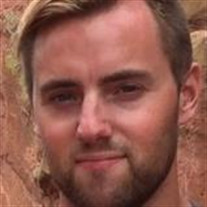 Princeton- Stephen Leonhart Puhr, 25, of Chicago, formerly of Princeton, passed away on Saturday, December 17, 2016. Stevie was born to Timothy James and Julie Germaine (Pagano) Puhr on September 18, 1991 in Shreveport, LA. He graduated from St. Bede Academy in Peru, and completed his undergraduate and graduate programs at University of Illinois. He worked for Travelers Insurance Company as an insurance adjuster. He enjoyed technology, working out, and drinking craft beer with his dad, brothers and friends. He also loved spending time with his family, friends, and his girlfriend, Nicolette. Those who knew Stevie, knew that he had an eye for style. He is survived by his parents; two brothers, Joseph (Michele) Puhr of Kingsville, TX., and Nicholas Puhr of Princeton; girlfriend of many years, Nicolette Gut of Rolling Meadows, IL.; maternal grandmother, Phyllis Pagano of Racine, WI.; paternal grandmother, Dorothy Puhr of Danville, IL.; numerous aunts and uncles; as well as many cousins and close friends. He was preceded in death by his two grandfathers, Clarence Pagano and Edward Puhr; as well as two cousins, Andrea Puhr and Robert Puhr. The family will receive friends on Wednesday, December 21 from 4:00 until 7:00 pm at the Norberg Memorial Home in Princeton. Funeral Mass will take place on Thursday, December 22 at 11:00 am at the Saint Louis Catholic Church in Princeton with Father Jeffrey Stirniman, the Benedictine Priests of St. Bede Abbey and Academy, and Deacon John Murphy. Burial will follow in the Oakland Cemetery in Princeton. In lieu of flowers, memorials may be directed to the family to establish a scholarship in his name. Online condolences may be left at norbergfh.com

The family of Stephen Leonhart Puhr created this Life Tributes page to make it easy to share your memories.

Send flowers to the Puhr family.