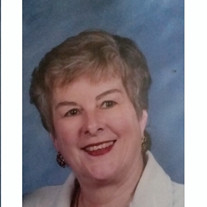 Princeton – Terry Lynne Ellberg, 74, of Princeton, IL, passed away from Parkinson’s disease at Liberty Village, Princeton, on Saturday, February 2, 2019. Terry was born in San Francisco, CA to the late Benjamin and Irma Joy (Tumbleson) Huffstodt on February 17, 1944. She was a graduate of Princeton High School, Class of 1962, and was the homecoming queen. She then attended Northern Illinois University from which she received a two-year secretarial degree. In the meantime, she married the late John Jensen, and they had two children, Michael and Marla. She married the late Carl Ellberg, Jr. on September 27, 1980, in Princeton, IL. After working several different jobs, including the opening and running of the Windchimer Shop, she finally found her calling in real estate. She was one of the cofounders of Bureau Valley Realty with Jan Heaton, and together they ran one of the most successful real estate businesses in the area. She was also a member of several local organizations and clubs. Terry enjoyed reading and traveling with Carl, mostly to visit grandchildren in the Peoria area, Ohio, Arizona, and Montana. She and Carl had a favorite getaway in New Glarus, Wisconsin, (the site of their honeymoon) which they visited frequently, as well as the Ozarks. She is survived by her six children: Marla Jensen of Princeton, IL; Michael (Connie) Jensen of Great Falls, MT; Patty (the late Jerry) McDonald of Chandler, AZ; Diane (Scott) Palubiak of Richfield, OH; Dan (Paula) Ellberg of Princeton, IL; Terri (Rick) Haas of Germantown Hills, IL; twelve grandchildren and fourteen great-grandchildren. She is also survived by one sister, Carolyn (Mike) Dailey of Sun City West, AZ. Terry is preceded in death by her parents, husband Carl Ellberg, Jr., grandson Luke Jensen, son-in-law Jerry McDonald, and brother-in-law Doug Riley and many beloved animals including Bridgett, PC, Arnold and Gracie. A visitation for Terry will be at the Evangelical Covenant Church on Monday, February 11, 2019 from 10:00 a.m. to 12:00 p.m. Services will be held at the Evangelical Covenant Church on Monday, February 11, 2019 at 12:00 p.m. officiated by Pastor Derek Boggs, followed by graveside service at Elm Lawn Cemetery in Princeton, IL. Terry will be deeply missed by her family, and her many, many, friends and acquaintances in the Princeton area and abroad. She can finally rest in peace following her long battle. In lieu of flowers, memorials may be directed to the American Parkinson’s Disease Association or to the Society for the Prevention of Teen Suicide in memory of her grandson Luke. Online condolences may be left at www.norbergfh.com. Arrangements by Norberg Memorial Home, Inc., Princeton, IL

The family of Terry Lynne Ellberg created this Life Tributes page to make it easy to share your memories.

Send flowers to the Ellberg family.