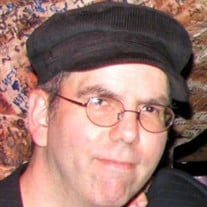 Princeton – Todd Ira Borsch, 53 of Princeton, IL passed away in his home on April, 11, 2018. Todd was born in Paw Paw, Michigan on August 22, 1964 to James and Faustine (Leonard) Borsch. He married Maria Caingod on October 21, 2006 in Lawton, Michigan. Todd was a graduate of Princeton High School, Class of 1982. He studied at IVCC, receiving an Associate Degree in Manufacturing Technology. He worked as a Quality Analyst and Lead Auditor at LCN/Allegion. He was also a member of the Richard Widmark Group. Todd was a music lover and a diehard Beatles fan. Every year, he went to Liverpool and played at the Cavern Club for the International Pop Overthrow Fest with friends. He had a vast collection of vinyl records, old bikes and guitars, and pictures of his hometown, Princeton, IL. He was in many bands including The Jeremy Band, Elite, Starfire Rize, Elementary Penguins, Lemon Clocks, Home Brew, The Ringles, The Gilligans and 212. He loved composing and recording his songs in his basement studio as well as performing as a studio artist for several bands. Todd loved history and was a founder of the group “All Borsch Created Equal” on Facebook. He was also a contributing writer to the BCR newspaper, his column titled “Headlines from the Past”. Todd was a great father, a loving husband and the best provider. He will truly be missed. He is survived by his loving wife of eleven years, Maria Borsch and one son, Jeremy Borsch – both of Princeton, IL, two brothers, James (Doris) Borsch of Wheaton, IL, and Robert (Anne) Borsch of Scottsdale, AZ, one sister, Juanita (Robert) Cretsinger of Battle Creek, MI, and one granddaughter, Calina Durey Borsch. Todd is preceded in death by his parents, James and Faustine Borsch, one sister, Julie Borsch, and his grandmother, Dorothy Leonard, who was always so special to him. His other maternal and paternal grandparents also preceded him. Funeral services will be held at Norberg Memorial Home, Pinceton, on Saturday, April 21, 2018, at 5:00 p.m., officiated by Pastor Jeremy Morris. A visitation will precede the service on April 21, 2018 at Norberg Memorial Home, Inc from 3:00 p.m. to 5:00 p.m. In lieu of flowers the family has asked that memorials be directed to the education fund for Todd’s son, Jeremy Borsch. Online condolences may be left at www.norbergfh.com

The family of Todd Borsch created this Life Tributes page to make it easy to share your memories.

Send flowers to the Borsch family.