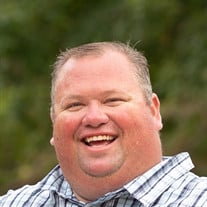 Princeton - Tony Lee Kramer, 45, of Princeton, Illinois, passed away peacefully on Friday morning, April 17, 2020. Born on May 1, 1974, to Roger and Mary (Foster) Kramer, Tony had a happy childhood. He was an avid member of the 4H Club and loved anything outdoors. A 1992 graduate from Princeton High School, he was a member of the Sportsman Club and participated in football and wrestling. He married the love of his life, Becky (Hanna) Kramer, in 1998. In 2000, their greatest achievement, Michael, was born. Their little family was complete. Tony and Becky were blessed with 21 years of marriage. Tony’s life work was rooted in service. He started off as an orderly at Perry Memorial Hospital, worked for the family business at Kramer’s Garage Doors, and, in 1993, became involved in the Princeton Fire Department where he later became an EMT and paramedic. He retired from the fire department in 2019 where he served 26 years. Most recently, he followed his passion and became an EMT educator for OSF Northern Illinois EMS. His service extended to the community as well. Tony was a member of the Princeton Jaycees and the Moose Lodge. He was also a member of the Evangelical Covenant Church. His hobbies included deer and pheasant hunting as well as fishing, especially his trips to Kentucky Lake. During the little spare time he did have, Tony loved riding his Harley with his cherished friends; some of his favorite spots included Hawg Rock, any and every Harley shop he encountered, and his local favorites like The Kompany, Skoonerz, and Psycho Silo. He was infamous for his themed Halloween costumes; his most memorable was as Elvis. His real passion in life, however, was attending Michael’s events as a proud Dad. If Michael was singing or playing the saxophone, Tony was happy. As a family, he, Becky, and Michael spent a lot of time traveling to Disney World and checking out new places (anywhere Becky could take pictures, that is). Tony touched more lives than any of us could imagine. His instant laugh and smile will be missed by his family, friends, and the city of Princeton as a whole. Tony is survived by his wife, Becky (Hanna) Kramer and son, Michael Kramer; parents, Roger and Mary (Foster) Kramer; siblings, Mindy and Kenneth (Tricia Pinter) Kramer and nephews, Samuel and Henry; his mother-in-law, Lorraine Hanna, sister-in-law, Lynette Hanna, brother-in-law, Gary (Rita) Hanna; numerous aunts, uncles, nieces, nephews, and cousins; and, their three obnoxious dogs: Baxter, Skeeter, and Reigo. He is preceded in death by his maternal grandparents, Bill and Marian Foster; paternal grandparents, John and Betty Kramer; his uncle, Merlin Foster; and his father-in-law, William “Deet” Hanna. In lieu of flowers, the family requests to please direct memorials to Michael’s college fund. A drive-thru visitation on Thursday, April 23, 2020 at Norberg Memorial Home, Inc. & Monuments will be held from 2:00 p.m. to 5:00 p.m. (please bring you own pen if you would like to fill out a memorial envelope). Online live streaming services will be held on Thursday, April 23, 2020 at 6:00 p.m. officiated by Reverend Derek Boggs. You may join us via private Facebook group, be sure to join the group before 6:00 p.m. on Thursday at Norberg Memorial Home, Inc. & Monuments Memorial Service Group. (link) https://www.facebook.com/groups/Norbergmemorialhomememorialservicegroup/ Honorary pallbearers, all loved deeply by Tony, include the following: Marc Cain, Caleb Dickens, Craig Dickens, Steve Grundman, Joe Hansen, Paul Kramer, Ben Kramer, and Bill Naffziger. Online condolences as well as memorials may be left at www.norbergfh.com click on the “Pay online” tab in the upper right corner. Arrangements by Norberg Memorial Home, Inc. & Monuments.

Princeton - Tony Lee Kramer, 45, of Princeton, Illinois, passed away peacefully on Friday morning, April 17, 2020. Born on May 1, 1974, to Roger and Mary (Foster) Kramer, Tony had a happy childhood. He was an avid member of the 4H Club... View Obituary & Service Information

The family of Tony Lee Kramer created this Life Tributes page to make it easy to share your memories.

Send flowers to the Kramer family.