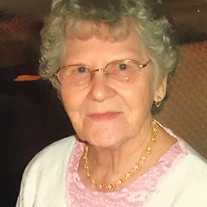 Princeton – Vida Frances Ahrens 97, of Princeton, IL passed away on Friday, February 7, 2020 at Manor Court in Princeton, IL. Lovingly referred to as Fran her entire life, was born on June 16, 1922 in Eldorado, OK to the late James and Mary (Havron) Vollentine. She started her career as a telephone operator then became a line worker at Westclock in Peru for 32 years, retiring in 1981 at the closing of the company. She met and married the late Merlyn R. Ahrens on September 4, 1964 at St. Matthews Lutheran Church, Peru, IL. A chance meeting, Merlyn had gone to a local dance club in Spring Valley with a few coworkers after working all day at Jostens. He saw Fran and asked her for a dance, people would say it was love at first sight, but it was after he tasted her pot roast that he fell madly in love with Fran. They were happily married for over 50 years. She was a member of the ladies baseball league, women’s bowling league, card club, secret pal club, Perry Memorial Hospital Auxiliary Club and St. Matthews Lutheran Church, as well as the women’s Auxiliary Club at St. Matthews Lutheran church. Fran loved to play games and was a champion domino player with her family and friends. She enjoyed playing cards and board games as well. She was an amazing baker and cook. She had a cookbook collection to rival any library. She had such a zest for life. She enjoyed her family gatherings and babies. She always wanted to hold them and kiss and love on them. One of her favorite pictures is one of baby Ben with kisses all over his face. She and Merlyn loved to travel all over the United States. She wasn’t a big sports fan, but Merlyn was and as long as they were together, she was happy to go along. Fran had a love for animals, her dog Mattie, a companion for life. Mattie almost turned into a service dog after Merlyn’s passing, never leaving Fran’s side. Fran loved life and she loved her family and brought a light into everyone’s life. Survived by one son, Orby Morell from Key West, FL; one daughter, Dorothy Cioni from Ottawa, IL; one daughter-in-law, Fela Morell from Peru, IL; three grandchildren, Bryan ( Cindy) Cioni, Christina (Joe) Bolelli and Nancy (Scott) Kmetz; five great grandchildren, Vincent, Sarah, Megan, Rebecca and Caitlyn. Fran is preceded in death by her parents, James and Mary Vollentine, her husband, Merlyn R. Ahrens (April 22, 2015), two sons, John Morell and William Morell, five brothers, Junior Vollentine, Woodrow Vollentine, Cleo Vollentine, Orby Vollentine and J.D. Vollentine, six sisters, Dorothy lee, Opal Gorman, Eva Martin, Vertie May Sanders, Cleta Bray, Mary Ellen Schmedeke. A visitation for Fran will be held on Monday, February 17, 2020 at Norberg Memorial Home, Inc. & Monuments from 9:30 a.m. to 11:00 a.m. Services will be on Monday, February 17, 2020 at 11:00 a.m. at Norberg Memorial Home, Inc. & Monuments officiated by Pastor Scott Schmidt. A separate graveside service will be held at 2:00 p.m. on Monday at the Oakwood Cemetery in Ottawa, IL. Arrangements by Norberg Memorial Home Inc. & Monuments Online condolences may be left at www.norbergfh.com

Princeton &#8211; Vida Frances Ahrens 97, of Princeton, IL passed away on Friday, February 7, 2020 at Manor Court in Princeton, IL. Lovingly referred to as Fran her entire life, was born on June 16, 1922 in Eldorado, OK to the late James... View Obituary & Service Information

The family of Vida Frances Ahrens created this Life Tributes page to make it easy to share your memories.

Send flowers to the Ahrens family.