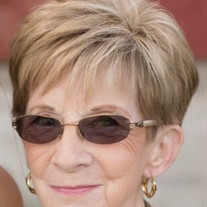 Wyanet – Wanda (Bayne) Partain, of Wyanet, IL passed away on Sunday, March 22, 2020 at Perry Memorial Hospital in Princeton, IL, surrounded by loved ones. Wanda was born in Elizabethtown, IL to the late Ova Lee and Ester (Needham) Bayne on February 13, 1935. After the family moved to Wyanet, IL in 1962, she began working for Harper-Wyman in Princeton, IL. She worked there for 40 years. She was married to the love of her life for 63 years before his passing in 2018, Harvey E. Partain. They married on October 31, 1954 in Iuka, Mississippi and started their family shortly thereafter. She enjoyed working in the yard and gardening. She had the most beautiful flower garden and she enjoyed tending to it in her free time. She loved to read and was a fantastic cook. Her mashed potatoes will be especially missed by her family. Her greatest times were always spent with family. Especially her children and grandchildren. She is survived by her son Elwood (Woody) and Carol Partain of Wyanet; four grandchildren, Drew (Robbyn) Partain of Utica, Lindsey (Nathan) Koning of Tiskilwa, Clarissa (Nick) Barto of Utica and Jeremiah (Abbey) Fairbanks of Normal; ten great grandchildren, Adelyn Partain, Landen, Wyatt, Avaya, Rowan and Nayvie Koning, Caleb Barto, Lyla, Anya and Micah Fairbanks; one sister, Donna Dutton of Rochester, IL; two sister-in-laws, Fay Walker of Gatlinburg, TN and Mosella (James) Patton of Dixon, IL. Wanda is preceded in death by her husband Harvey E. Partain ((04/07/2018) of 63 years, and her parents, Ova and Ester Bayne. In lieu of flowers memorials may be directed to Wyanet Rescue or the Wyanet Library. The family has decided at this time, it would be best to have a celebration of life at a later date and time. Arrangements by Norberg Memorial Home, Inc. & Monuments Online condolences and memorials may be left at www.norbergfh.com

The family of Wanda J Partain created this Life Tributes page to make it easy to share your memories.

Wyanet – Wanda (Bayne) Partain, of Wyanet, IL passed away on...

Send flowers to the Partain family.