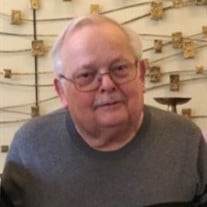 Princeton - Wayne L. Anderson, 77, of Princeton, IL, passed away on Thursday, November 11, 2021 at OSF St. Francis in Peoria, IL, surrounded by his loving wife. Wayne was born in Moline, IL to the late LaVerne and Maxine (Carroll) Anderson on December 30, 1943. He married Connie J. Anderson on November 18, 1994 in Princeton, IL at the Bureau County Courthouse by Judge Winbiscus. He was employed as a Baptist Minister for many years in Illinois, Arkansas and Tennessee. He also worked at Cardox Chemical in Morris, IL and at Ace Hardware Distribution Center in Princeton, IL., he retired in 2010 from the First Baptist Church in Sparland, IL., he was serving as the pastor at that time. Wayne enjoyed hunting and fishing, and spending time with his coffee buddies talking about the one that got away. He enjoyed Country Western Dancing with Connie and taking trips to Branson and other interesting spots. He loved animals and spending time with his fur babies, Lady and Missy. He was a Gold Coat Volunteer for many years at Perry Memorial Hospital. Surviving Wayne is his wife of almost 27 years, Connie J. Anderson of Princeton, IL; one son Jonathan Anderson of Nashville, TN; three grandchildren, Isaac, Raeanne and Nathan, all of TN; one sister Linda (Jerry) Harris of Princeton, IL; two brothers, Terry Anderson of New Mexico and Robert Anderson of Princeton, IL. His favorite sister-in-law Margie (Jim) Wegrzyn of McNabb, IL; as well as many nieces, nephews, cousins and his special girls, Lady and Missy. Preceding him in death are his parents, LaVerne and Maxine Anderson, one brother, Andrew Anderson, his special daughter Susan Lucas (10/6/2021), his fur babies, Wiggles, Mugs, Rascal, Tazi and Sassy. Visitation for Wayne will be held on Thursday, November 18, 2021 at Norberg Memorial Home, Inc. & Monuments from 10:00 a.m. to 11:00 a.m. Services to follow on Thursday, November 18, 2021 at 11:00 a.m. officiated by Pastor David Mundt, at Norberg Memorial Home, Inc. & Monuments. Private internment to be held at a later date and time. In lieu of flowers, memorials may be directed to Christ Community Church in Princeton, IL. Online condolences and memorials may be directed to www.norbergfh.com Arrangements by Norberg Memorial Home, Inc. & Monuments.

The family of Wayne LaVerne Anderson created this Life Tributes page to make it easy to share your memories.