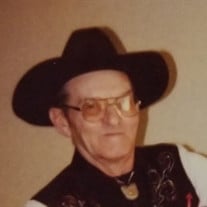 Mt Morris - Wayne Beers, 82, of Mount Morris Illinois, passed away on September 15, 2018 at the Pinecrest Nursing Home in Mount Morris, IL. Wayne was born in Canby, Minnesota on July 14, 1936 to Virgil and Eleanor Beers. His family moved to Milledgeville, Illinois and before he finished high school, he enlisted in the US Army and served two years active-duty from 1955 to 1957. Wayne did farm work and truck driving for the Zemke family in Milledgeville. He loved horses and it was through a local saddle club in Mount Carroll, Illinois that he met his wife, Janet Schindel of Savanna, IL. The couple started raising horses in the late 1960’s naming their place Peppernick Horse Farm managing 26 head of horses. Wayne and Janet were married in 1970 having one son, Ike Beers of Littleton Colorado. They moved to Colorado where Wayne lost Janet in 1984 to cancer. The horses moved to another owner and Wayne eventually moved back to Illinois where he lived between the towns of Ohio, Polo, and Mt. Morris where he finally passed away due to health complications. Wayne loved to play golf and bowl in the local Mt. Morris and Polo area. He liked woodworking activities, but his pride and joy was his eagle figurine collection that his neighbors and friends always appreciated and enjoyed viewing. He is survived by his son Ike, daughter in law Kari, grandchildren Rocky, Raegan, Rowdy, Rylie and several in laws, nieces and nephews. Wayne was preceded in death by his wife Janet, his parents, Virgil and Eleanor, and three brothers Don, Nordahl, and Larry. Graveside services will be held on Wednesday, September 19, 2018 at 11:00 a.m. at Elm Lawn Memorial Park in Princeton, IL. In lieu of flowers, memorials may be directed to the family. Arrangements by Norberg Memorial Home, Inc. & Monuments. Online condolences may be left at www.norbergfh.com

The family of Wayne V. Beers created this Life Tributes page to make it easy to share your memories.

Send flowers to the Beers family.