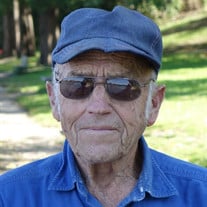 Princeton - Our dad, Willard W. Elmore, passed away on November 23rd, 2020. He was 95 ½ years old and died from complications of Covid-19. Because of this virus we are unable to have a normal visitation and funeral service. There will be a private burial service for the family and we will have a celebration of life in the future when we can all safely gather. For now, this is who our father was: He was a man of integrity and honesty. He was the hardest working man that we have ever known, the kindest and the most humble. He could fix anything! He was a farmer, a trucker and an electrician and was well respected within the community. He was a man who also deeply loved and took great pride in his family. He was born on a farm near Belgrade, Nebraska on May 31, 1925 to Weedie L. and Fannie E. (Milby) Elmore. He moved to Bureau County Illinois with his parents and 6 siblings, one sister-in-law and one niece during the dust bowl in January 1938. Dad was number 5 of the 7. Besides Nebraska and Illinois, he also lived in Florida where he lived on Lake Okeechobee. He loved to travel and was able to say that he had visited all 50 states and three continents. When we were little he made it a point to take us to as many of the lower 48 states as possible before we left home. We did make it to most. He was a man of Christian faith, a member of the Dover Bible Church, a church deacon, a basketball score-keeper, a civil defense member and a school board member. He loved camping, fishing, restoring old tractors, the Big Apple Family Restaurant, Sip and Snack chicken, and telling corny jokes. He rode a motorcycle until he was 88 years old and lived in his own home until he was almost 94. He loved tinkering in his shop and took pride in his work. He had a strong sense of right and wrong. He loved his wife, Doris, deeply, and mourned her for the many years since she passed (2/28/2016). He visited her every day he was able while she was in the nursing home for nearly 10 years. He has longed to be with her again, and now he is. He leaves behind four children, David (Kay) Elmore of Newark IL, Don (Sandy) Elmore of Dover IL, Roger (Ann) Elmore of Fayetteville AR, and Diana (Ken) Weston of Wrightwood CA., 17 grandchildren and 18 great grandchildren, as well as his sister Darlene (Bud) Hartwig. He is preceded in death by his parents, his wife Doris, his granddaughter Emily, his four brothers, William, Rollin, Forest and Gerald, and his sister Alma. Memorials may be sent in Willard’s name to the Bureau County Food Pantry or the Dover Bible Church. He is deeply loved and will be greatly missed. Thank you to all that have cared for him over the years and during his last few months. We hope to greet you all and give everyone hugs when we are able to celebrate his life together at a future date. A private graveside service will be held for family only, officiated by Pastor Joe Denner. A celebration of life will be held at a later date and time. Online memorials and condolences may be left at www.norbergfh.com Arrangements by Norberg Memorial Home, Inc. & Monuments.

Princeton - Our dad, Willard W. Elmore, passed away on November 23rd, 2020. He was 95 ½ years old and died from complications of Covid-19. Because of this virus we are unable to have a normal visitation and funeral service. There will be a private... View Obituary & Service Information

The family of Willard W Elmore created this Life Tributes page to make it easy to share your memories.

Princeton - Our dad, Willard W. Elmore, passed away on November...

Send flowers to the Elmore family.