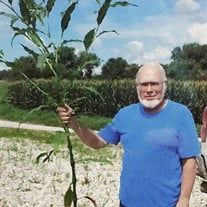 Ohio – William Curtis Fordham, 77, of Ohio, IL, passed away suddenly at home on Wednesday, June 26, 2019 at home. William was born on August 10, 1941 to the late Curtis and Alice (Grabill) Fordham in Princeton, IL. He was a graduate of Princeton High School and attended Bradley University for three and a half years. He married Marilyn May on September 8, 1962, his bride of 56 years. William started his career as a farmer and owning his own business as a grain market consultant. He was a member of the Evangelical Covenant Church, holding many positions within the church. He was also a chairman of the Children’s Home Board and a member of the Corn Growers Association. William enjoyed coin collecting, writing, and antiquing. His best memories and favorite past time was always spending time with his family. He is survived by his wife Marilyn; his four children, Ron Fordham of Warrenville, IL., Barb (Jeff) Beauchem of Oregon, IL., Brenda Smith of Princeton, IL., Betty (Owen) Lundeen of Princeton, IL; eight grandchildren, Nicole, Amy, Amanda, Jonathan, Alyssa, Jacob, Christina and Emily; four great grandchildren, Zoe, Liam, Bale and Linkin; four foster children, Doris (Randy) Cruse of Elizabethtown, KY., Pat Downs Bright of Palm Springs, CA., Mary (Chris) Holman of Round Rock, TX., Sue (Joe) Cooksey of Bay, AK. William is preceded in death by his parents; one sister, Shirley Seidel; one brother-in-law, Dr. Jerry Seidel. A visitation for William will be held at Norberg Memorial Home, Inc. on Sunday, June 30, 2019 from 5:00 p.m. to 7:00 p.m. Services will be held on Monday, July 1, 2019 at the Evangelical Covenant Church at 10:00 a.m. officiated by Reverend Derek C. Boggs and Reverend C. John Weborg, followed by graveside services as Oakland Cemetery in Princeton, IL. In lieu of flowers, memorials may be directed to the Bureau County Food Pantry of Princeton, IL. or the Evangelical Covenant Church, Princeton, IL. Arrangements by Norberg Memorial Home, Inc. Princeton, IL. Online condolences may be left at www.norbergfh.com

The family of William Curtis Fordham created this Life Tributes page to make it easy to share your memories.

Send flowers to the Fordham family.