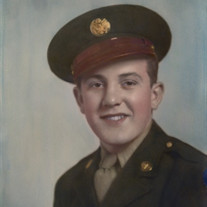 Princeton - Technical Sergeant William “Bill” Joiner, loving husband of Carol Joiner (nee McMahon), father to Judith Thomas and Patricia Carlson, resident of Princeton, Illinois, and an Airmen of the “Mighty Eighth” Air Force passed away peacefully on Thursday, April 30, 2020 at the age of 94. Bill is survived by his daughters, Judy (Larry) and Pat (Bob); his four grandchildren, Mimi Casey (Lt. Col John Casey), Emily Moats (Shawn), Baron Carlson (Irene), and Bridget Hadfield (Brian); and his five great-grandchildren, Chloe and Lucy Moats, Liam Carlson, and Regan and Sullivan Casey. Bill was born in Agency, Iowa on July 3, 1925 into a family of 12 brothers and sisters. They moved to Illinois where he attended Tiskilwa High School and was already demonstrating natural leadership qualities as the football team’s quarterback. Hearing his nation’s call, he enlisted in the United States Army Air Corps as a B-17 Flying Fortress Flight Engineer and served over the skies of Europe where his bravery and dedication to his fellow Airmen contributed to the eventual defeat of Nazism and restoration of freedom throughout the continent. Upon returning home to the United States, Bill married Carol, his high school sweetheart, on October 28, 1947 at St. Mary’s Catholic Church in Tiskilwa. He was employed his entire career by Strunk Bros. Asphalt as a truck driver hauling heavy construction equipment throughout Illinois giving him a quiet, familiar relationship with the land he loved. During this time, he developed a fondness for his big, black Mack Truck; the engine, he was immensely proud of, he rebuilt himself. Furthermore, he and his wife owned and operated Ragamuffins Children’s Store on Princeton’s Main Street for 25 years. Bill was an avid tool collector, enjoyed rebuilding engines, and relaxed by observing his koi pond. His miniature dachshund, Sophie, provided him with companionship, amusement, and unconditional love. He was a fan of the Lawrence Welk Show and old western programs. He was a member of the Saint Louis Parish. He was preceded in death by his wife, Carol, brothers Robert Joiner, Hobart Joiner, Max Joiner, sisters Nadine Sapp, Maxine Ringenberg, and Barbara Kasbeer. He is survived by brothers Teddy Joiner of Tiskilwa, Tommy Joiner of Utica, Jerry Joiner of Cherry, and Joe Joiner of Seymour,IN; as well as sisters Charlotte Morris of Yorkville and Susie Leverett of ValRico, FL His family especially thanks his granddaughter Emily and his caregivers, Annette Serpette, Betsy McGlauflin, Joyce Moore and Jenn Ryan who cared for him so lovingly and whom he loved dearly. No services will be held until such time as to when we can all gather together to celebrate the life of a man so dearly loved and so sadly missed. In lieu of flowers, memorials may be directed to St. Louis Parish or EAA Aviation Foundation to the B-17 Aluminum Overcast Restoration and Upkeep. Sergeant Joiner, your final order from the Chief - “Go rest easy, your mission is complete.” Online condolences and memorials may be left at www.norbergfh.com Arrangements by Norberg Memorial Home, Inc. & Monuments.

The family of William N Joiner created this Life Tributes page to make it easy to share your memories.

Send flowers to the Joiner family.