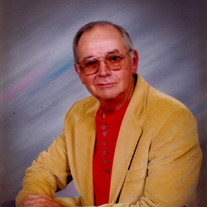 Princeton – William “Wiggy” Wiggins, 72, of Princeton IL, passed away on Thursday, May 30, 2019 at home surrounded by loved ones. Wiggy was a nick name he was known by for almost his entire life. He was born on December 18, 1946 to the late Charles and Ruth (Burger) Wiggins in Princeton, IL southeast of town on the family farm. He went to school in the one room country school, he completed through 7th grade there, attended 1 year at Logan and was a graduate of Princeton High School, class of 1964. He married Barbara Keilty on February 3, 1980 at the First Presbyterian Church in Princeton, IL. He worked as a Crop Hail Adjuster for Pioneer Seed Corn, he also worked for Piggly Wiggly before going to work for Bill Wirges Muffler Shop where he worked for seven years. He also worked for Princeton Redi Mix for over thirty years, retiring in 2009. During his entire life, his all-time favorite job was farming his land, something he did until the day he passed. He was a member of the Elks Club even serving as the Grand Exalted, he was a member of 4-H and Future Farmers of America and served as the Associate Director of H.O.G. Wiggy enjoyed anything outdoors. He was a well-known motor enthusiast. He enjoyed people, but he also valued his time alone on his bike, mower or tractor. He was a member of the early morning coffee crew with the guys just to get the day started, he did this every day for over fifteen years. He said his love, Barb was his keeper for over 38 years. God only would have known the outcome of his life without her. He stated many times “God sent me an angel and her name was Barb”. He is survived by his loving wife of 39 years, Barbara(Keilty) Wiggins; two stepchildren Kevin Lafferty and Laura Lafferty; two grandchildren, Megan (Matthew) and Brandon; four great grandchildren, Madison, Mason, Marshall and Memphis; one sister Connie (Greg) Henry; one sister-in-law, Jane Wiggins; one niece, Amy; three nephews, Matthew, Chad and Todd; as well as numerous cousins. Wiggy is preceded in death by his parents, Charles and Ruth Wiggins; one brother, Thomas Wiggins; one sister in infancy. In lieu of flowers, memorials may be directed to Second Story Teen Center 1033 ½ N. Main St. Princeton, IL. or Princeton Buddy Bags, Inc. 1810 Fletcher St, Princeton, IL. Family and friends will be received on Friday, June 7, 2019 at Norberg Memorial Home, Inc, Princeton, IL from 10:00 a.m. to 11:00 a.m. Services will be held at Norberg Memorial Home, Inc. on Friday, June 7, 2019 at 11:00 a.m. officiated by Pastor Angie McClean. A private burial will be held at a later date and time. In addition, a Celebration of Life will be held at a later date and time by the family. Date and time will be announced via Bureau County Republican. Arrangements by Norberg Memorial Home, Inc. Princeton, IL. Online condolences may be left at www.norbergfh.com

The family of William Charles Wiggins created this Life Tributes page to make it easy to share your memories.

Send flowers to the Wiggins family.