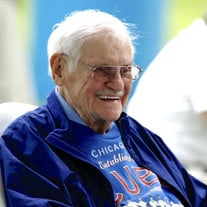 Princeton - William Eugene “Bill” Nelson, 98, of Princeton passed away on Thursday, November 15th, at Liberty Village in Princeton. Bill was born March 25th, 1920 in Rockford, the son of Anna (Wallin) and Alfred Nelson. The family moved to Chicago when Bill was a small child to the Logan Square neighborhood. Bill attended Lane Tech High school where he excelled in baseball, spending two years as back up first baseman to Cubs superstar Phil Cavaretta before gaining the starting job his last two years of school. After graduation he started his pharmacy studies at Hines Hospital School of Pharmacy. During this time Bill also played semi-professional baseball. Upon graduation he moved back to Rockford where he met Ramona Davis. Bill and Ramona were married on November 28th, 1942 and left for San Diego where Bill entered the US Navy, Pacific Theatre, as a pharmacist. After the war they moved to Princeton, opening Nelson Drug Store in 1949. Ramona passed away April 4, 1987 and he remarried Judith Ruch Struthers, on March 18, 1995. He became involved in a number of community organizations including Princeton Booster club, Lions club, American Legion , Bureau Valley Country Club, Illinois Valley Pharmacy ‘association, Princeton Chamber of Commerce and was at the time of his death the last founding member of the BPOE Lodge of Princeton. In 1964 Bill was appointed to the Princeton City Council where he served for 15 years until he was elected Mayor of Princeton in 1979 and again in 1983. Bill was always called “Mr.Mayor” from that time on. Bill was accorded a number of honors in his life, including Retailer of the Year, Homestead Festival Grand Marshall and Gallery of Ageless Achievers. Bill was selected as the first recipient of the Lifetime Achievement in Pharmacy award by the Illinois Pharmaceutical Association. At the time of his retirement in 2012, Bill was the oldest practicing pharmacist in the United States. His work life spanned over 83 years, from selling newspapers on the street corners of Chicago in 1929 until retirement in 2012 at the age of 92 ½. He is survived by his wife, Judith Ruch Nelson; daughters Karen (John) Criner; Connie (Richard) Miles; sons William (Dorothy) Nelson; and Eric (Brenda Sloan) Nelson; a stepson Jason (Amie) Struthers; ten grandchildren; ten great-grandchildren; his sister Shirley (Roger) Holmstrom; sister-in-law Rita Nelson ; brother-in-law Lynn Davis. Bill was preceded in death by his first wife Ramona; a son, Dale; stepson James; his sister Dorothy Sonni, brother Bob and his parents. A Celebration of Life service will be held Sunday, December 2nd at Princeton Elks Lodge from 1 to 4 pm. Because of his life-long love of baseball and the Chicago Cubs, the family asks that in lieu of flowers, memorials be directed to Princeton Youth Baseball. Online condolences may be left at www.norbergfh.com Arrangements by Norberg Memorial Home, Inc.

The family of William "Bill" E Nelson created this Life Tributes page to make it easy to share your memories.