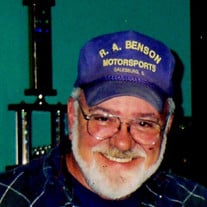 Princeton – William J. “Bill” Rokey, 79, of Princeton, IL passed away at his home on April 3, 2019 surrounded by his family. Bill was born on May 4, 1939 to William P and Ivy (Nelson) Rokey. He married Jolene Roberts on December 28, 1984 in Peoria, IL. He was a truck driver for over 50 years, driving over the road until his retirement. After retirement he continued trucking by hauling grain for Don Stoner. Bill was an avid stock car enthusiast, owning several stock cars over the years and was CEO of RBR Racing. He enjoyed riding his Harley, hanging out in his garage and recently became an avid Facebook user. His best times were spent with family and friends, he loved life and anything that involved speed. Bill was one of a kind and will be sadly missed. Bill is survived by his wife, Jolene of 34 years; four children, Kevin Rokey of Lancing, MI, Kimberly Rokey of Princeton, IL Kory (Sara) Rokey of Princeton, IL and Travis Rokey of Bloomington, IL; ten grandchildren and thirteen great grandchildren. He was preceded in death by his parents. Per Bill’s request, there will be no services at this time. A celebration of life will be held on May 4, 2019 at the Hawg House Saloon in Princeton, IL starting at 3:00 p.m., all are welcome to join the family in celebrating his life. In lieu of flowers, memorials may be directed to the family for charitable distribution. Online condolences may be left at www.norbergfh.com Arrangements by Norberg Memorial Home, Inc. Princeton, IL

The family of William "Bill" J Rokey created this Life Tributes page to make it easy to share your memories.

Send flowers to the Rokey family.